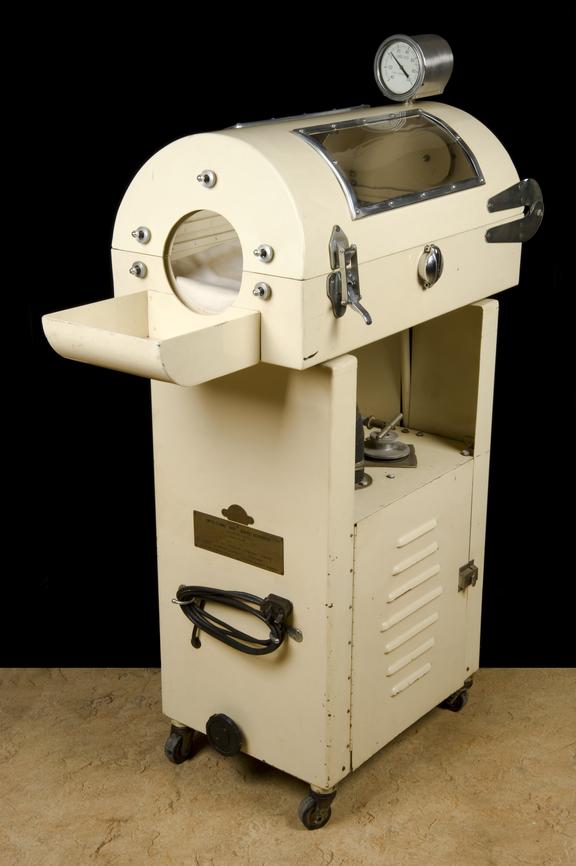 Devised in 1956 by George Thomas Smith-Clarke (1884-1960), a British engineer, the Smith-Clarke ‘Baby’ cabinet respirator was a type of iron lung.

First developed to treat gas inhalation victims, iron lungs were subsequently used to treat patients whose chest muscles were paralysed from diseases such as polio. Patients were encased in the cabinet. Air at alternating pressures was pumped into the chamber causing the lungs to inflate and deflate so the person could breathe.

Designed for use by infants, Smith-Clarke designed the ‘Baby’ breathing machine at the request of a paediatrician. The machine influenced the later development of incubators for infants. Smith-Clarke modelled the ‘Baby’ respirator on an iron lung he had developed for adults in the 1950s, known as the Mark II. Unlike the adult version, the ‘Baby’ version was designed to incorporate the pump and patient chamber in one unit. Smith-Clarke devised a new way of opening and closing both the ’Baby’ and Mark II versions of the iron lung. Hinged at one end, the machines became known as ‘alligators’, for the way the cabinet mimicked the jaws of the creature. Smith-Clarke models remained popular throughout the 1960s. This example was by made the Cape Engineering Co. Ltd., based in Warwick, England.

We encourage the use and reuse of our collection data.

Data in the title, made, maker and details fields are released under Creative Commons Zero

Our records are constantly being enhanced and improved, but please note that we cannot guarantee the accuracy of any information shown on this website.